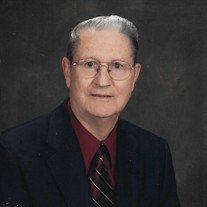 James Dale Oliver went be with His Lord on February 24, 2021. He was born September 6, 1933 in Glade Spring, VA and was the son of the late Roy and Stella Oliver. He was predeceased by his sister and brother-in-law, Wilma and Mahlon Wyatt.

He graduated from Liberty Hall High School in 1951 and earned a B.S. Degree in Agricultural Education from VA Tech in 1955. He graduated from the Cadet Corp and served 2 years as a Lieutenant in the U.S. Army Artillery and was discharged as a Captain. After being discharged from the Army, he was appointed as an extension agent in Roanoke County, VA in 1957. In 1960 he accepted a faculty position in Ag Education at VA Tech and completed his M.S. Degree in 1963 and a Ph.D. Degree in 1970 in Agriculture Economics. He retired from VA Tech in 1992.

Dale was a good friend to all who knew him and was always faithful to whatever task he was appointed to do as evidenced by his being a member of the Blacksburg Planning Commission for 35 years, serving on the Board of Appalachian Bible College for 37 years, and being a member of Harvest Baptist Church where he faithfully served as deacon, Sunday School teacher and in many other positions. He was active in many roles in the community and enjoyed VA Tech Sports.

Viewing is limited to groups of ten and is from 10:00 am -12:00 pm, Saturday, February 27 with a funeral service at Harvest Baptist Church in Blacksburg at 1:00 pm. A graveside service will be held following the funeral at Roselawn Memorial Gardens. The service will also be livestreamed at harvestofblacksburg.com.