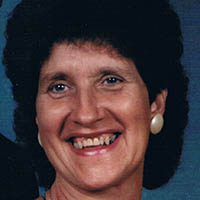 Loretta Peters Oakley, 80 of Ripplemead, VA went to be with the Lord on September 23, 2015 at Princeton Community Hospital. Loretta was born on May 3, 1935 in Pearisburg, VA and was a daughter of the late Marshall Webster Peters, Sr. and Namoi Ruth Robertson. Besides her parents, she was preceded in death by her son Gregory P. Oakley, two nephews, Barry L. Peters, Randy W. Peters and one sister, Della Marguerite Peters. Loretta was a preschool teacher for 56 years, and was a member of the First United Methodist Church in Pearisburg. She is survived by her husband of 58 years, James Richard Oakley of Ripplemead, one daughter, Teresa O. Perdue and her husband Russell of Ripplemead, daughter-in-law, Brenda Oakley of Charlotte, NC, six grandchildren, Crystal P. Boggess and husband Mason of Rich Creek, Kaylee C. Oakley, Justin, Kimberly, Meghan and Matthew Scott all of Charlotte, eight great grandchildren, Rhea Perdue, Maresa Boggess, Aubrey, Ava, and Emma Lemley, Lyla and Shaun Scott and Cristiano Martinez, one brother, Marshall W. Peters, Jr. and wife Doris of Ripplemead, one sister, Betty P. Sarver and husband Jack of Ripplemead, one niece, Kimberly J. Williams and husband Keith of Ripplemead, one nephew Marcus Dale Sarver of Guinea Mtn. Funeral services will be conducted Monday, September 28, 2015 at 11:00am at the First United Methodist Church in Pearisburg with the Rev. Dr. Brian Burch officiating with burial following in the Birchlawn Burial Park in Pearisburg. The family will receive friends at the First United Methodist Church Sunday evening from 6 – 8 pm At Loretta’s request, all past and present preschool students that can attend sit in the same section. Online condolences can be sent to the family at givensfuneralhome.com.