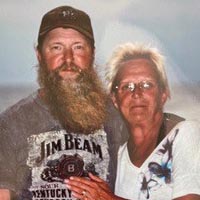 Rebecca (“Becky”) Gill Nunley, 60 of Radford, passed away Friday, April 3, 2020 peacefully at her home after a courageous battle with cancer.

She will be missed by all that ever met her.

Due to the ongoing public health situation, a memorial service will be announced at a later date.
Arrangements by Seaver Brown Funeral Service and Crematory in Marion, Virginia