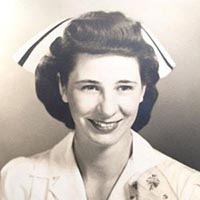 Aldene Nowlin, age 92, joined her husband Arch in heaven, Sunday, March 17, 2019. They had only been apart for a little more than three years after 65 years together. Eula Aldene Moore was born September 28, 1926 in Freeburn, Ky. She was the fifth of six children of Marion Homer and Essie Keith Moore, who were from Floyd County, Va. where numerous extended family still reside.

She was predeceased by all her siblings, Eugene Moore, Harold Moore, Vernon Moore, Clarence Moore, and June M. Kirk.

She was raised in Freeburn and in Vulcan, W.Va, and she attended the Williamson Memorial Hospital School of Nursing in Williamson, W.Va. There she met Arch Nowlin, and they married June 3, 1950 in Ottumwa, Iowa. They lived in Illinois for a while, and she worked at the local hospital until their first child was born. They relocated to Roanoke in 1955, where their second child was born. Aldene became primarily a homemaker, although she kept her nursing license active. Later she turned her interest to arts and crafts. She enjoyed trying her hand at everything from knitting, to painting, to quilting. In her later years she was devoted to assisting Archie as his health declined due to dementia. She retained her intellect and personality throughout her medical challenges, succumbing to pneumonia after a very brief illness.

Services will be held at the Stimson Funeral Home Chapel, and the 3 p.m. service will start promptly at 3:30 p.m. People who knew her will understand. Fellowship will follow the service.

Many thanks to the staff of South Roanoke Nursing Home for their care and compassion. In lieu of flowers, donations may be made to the Salvation Army, Greene Memorial United Methodist Church, or a charity of your choosing. Arrangements by Simpson Funeral Home Chapel. (540)366-0707.