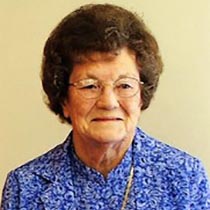 Lucille T. Nolen, 95, of Floyd, entered her heavenly home Monday, November 20, 2017. She was a beloved mother and grandmother who joyfully shared her christian faith. As a child she walked to New Haven Baptist Church where she became a lifelong member. Lucille worked as a seamstress for 42 years in the local garment factory. She lovingly shared her gift of sewing to help out family and friends. She also enjoyed quilting and crocheting. In the summer she was found gardening, cooking and canning. She blessed many with her famous apple pies, a tradition and family recipe handed down by her mother. Preceding her in death was her husband of 57 years, Edd Nolen, parents Claude and Alma Thomas, and great great-grandson Alex Webster. She is survived by four children: Joyce (Doug) Wyatt, Curtis (Cammy) Nolen, Kenneth (Bobbie) Nolen, Judy (Norman) Hylton. Seven grandchildren: Becky Hartman-Ellis, Jeannie Loving, Tammy Kirtner, Julie Hunley, Kenny Nolen, Chris Nolen, Nicole Epperly. Twenty-one great grandchildren, nine great-great grandchildren. Sister-in-law Fern Nolen and faithful friends and neighbors. Funeral services will be at 2 p.m., Friday, November 24, 2017 at Gardner Funeral Home with Reverends Leon Wood and John Chambers. Interment will follow in Jacksonville Cemetery. Friends may call after 8:30 a.m., Friday, November 24, 2017 where family will receive friends from noon to 2 p.m. Flowers are appreciated or donations can be made to the Medical Charities of Floyd in memory of Mrs. Nolen. Arrangements by Gardner Funeral Home. Online condolences may be made at http://www.gardnerfuneralhomefloyd.com or on Facebook @gardnerfuneralhomefloyd.