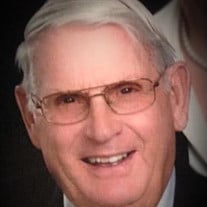 Henry Wilmon Nixon, 87, of Christiansburg, VA passed away peacefully at home on July 26, 2021, surrounded by family and friends.
Henry was born in Christiansburg,VA on February 23, 1934.

He graduated from Christiansburg High School. He was veteran from the United States Army. He was a lifelong, respected resident of Christiansburg, VA. He was a delivery man for Clover Creamery/Meadow Gold Creamery for most of his life and was well known in the surrounding area for his smile and friendly personality.

Henry spent his spare time working around the house and loving his grandchildren. No matter what it was, drag racing, school, Girl Scouts, Boy Scouts, or any activity they were involved in, he was there. He made a point to go to every race he could. They were his pride and joy.

Henry is survived by his beloved wife of 66 years, Doris Pugh Nixon of Christiansburg, one daughter, Sandra Nixon Ganoe(Mike Ganoe), of Radford, and brother, George Grover Nixon Jr. of Christiansburg, brother and sister-in-law, Ottis and Loretta Pugh of Christiansburg, and brother and sister-in-law, Randall and Barbara Pugh of Rhode Island. He leaves behind, to cherish his memory, two grandchildren, Jeremiah and Callie Ganoe, and one additional grandson(soon to be by marriage), Marshall Kiser of Radford. He also leaves behind many cousins, nieces and nephews.

Visitation will take place a Horne Funeral Home in Christiansburg on Friday, July 30, 2021 from 7-9p.m. The funeral service will be held on July 31, 2021 at 11:00 am at St. Paul United Methodist Church in Christiansburg, VA, with interment to follow at Sunset Cemetery.