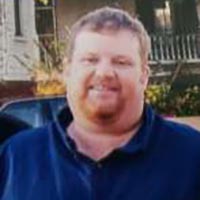 Randall Lee Newby, 50, of Wytheville, and formerly of Pearisburg, Virginia went to be with his Heavenly Father on Saturday, October 10th after a weeks-long battle with COVID-19. Randall, “Randy,” was preceded in death by his father, Roy Lee Newby, and mother, Eleanor Mosburg Newby.

Left to cherish his memory are his wife of 15 years, Hilary Hunt Newby, and his beloved son, Ryan Newby, 17. Also surviving are his brother Rusty and his wife Bridget Newby, and their daughters Laney and Sydney. Randy also leaves behind his father-in-law, Robert Hunt, his Aunt Joyce and Uncle Frank Longrie, special cousins Brenda Bowles, Angie Davis, Debra Conley, and countless other treasured relatives and extended family. His extended family includes a sister-in-law and brother-in-law, Kara and Jason Hale of Crockett, VA and their daughters, Virginia Grace, Scarlett, Audrey, and Daisy, as well as brother-in-law Scotty Scott (wife, Gena) and their family of Dublin, VA.

Randy was a kind soul and hard worker. He began working at Pulaski Furniture in 1988 and made many lifelong friends in his 10 years there. He also worked for Virginia Oil Company managing the Texaco at Exit 98 before making the transition to Frito-Lay where he has worked for 15 years as a route salesman of chips and snacks. Randy took pride in his job and the relationships he made carrying it out, leaving satisfied customers and friends behind wherever work took him.

An avid golfer and sports fan, Randy could always carry on a conversation about a long drive or short game, how the Yankees were doing, and the prospects for his Dallas Cowboys’ current season. His favorite place to be, however, was on the sidelines watching his pride and joy, Ryan, snap the football or come up to bat.

Randy will be remembered for his friendly demeanor, his bright smile, and his unique laugh. His sense of humor and warmth will be missed by all who knew him.

The family will receive friends at Riverview Baptist Church on Thursday, October 15th from 5-7pm with a memorial service immediately following. A graveside service will be held at Birchlawn Burial Park in Pearisburg, VA at 10:00 am on Friday, October 16th. Online condolences may be sent by visiting www.kendallfuneralhome.com. The staff of Kendall Funeral Home in Pembroke, VA are honored to be serving the Newby Family.