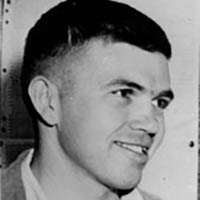 Robert Garland “Bob” Nester, who died May 27, 2021, loved the game of golf. Together with other Floyd County golfers, he was a founding member of Great Oaks Country Club, which was home to a nine-hole course that opened in 1968. The beautiful mountain course that they created was expanded to 18 holes in 1992, drawing golfers from all over Virginia and the nation. His contribution, along with the contribution of the other founders is memorialized on a plaque by the clubhouse door. He was club president for four years, spread over two terms.

His childhood was spent in the town of Floyd, after which he moved with his family to the community of Falling Branch in 1940, where he lived until his death and was an active member of the Falling Branch Church community. He had two siblings, a brother Hugh, who now lives in Richmond, Virginia, and a sister Lois Ann, who is deceased.

He served his country in the Pacific theater during World War II as a sailor aboard the ammunition supply ship Wrangell, earning four battle stars and seeing action during the crucial battle of Iwo Jima, where he witnessed the famous raising of the United States flag on Mount Suribachi.

After the war, he continued to contribute to the defense of his country, working at the Radford Army Ammunition Plant for 30 years as an employee of the Hercules Powder Company. For several years, he was post commander of the Floyd chapter of the Veterans of Foreign Wars, where he was active in chapter activities, including military funerals and the display of United States flags on important holidays in the town of Floyd.

His service to Floyd youth included time spent as assistant scout master of troop #36 of the Boy Scouts of America.

He was a loving and devoted husband to his wife Betty (formerly Betty Louise Slusher). They were married in 1947 and raised two sons, Richard and Allen.