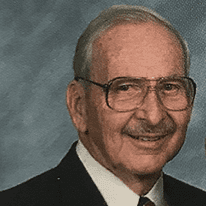 Marvin Kemp Nester, age 96, of Lakeland, Florida, passed away Saturday, November 20, 2021. He was born in Berwind, West Virginia on October 28, 1925 and was the son of the late John Cloyd and Mary Ethel Nester.

Marvin had made his home in Lakeland for the past 37 years and was retired from Publix having worked as Assistant Production Manager for the Lakeland dairy manufacturing facility. He was a 1950 Dairy Science graduate of Virginia Tech and was awarded the Purple Heart for his service in the Army Air Corps during World War II. He loved his family and enjoyed fishing with his sons and grandchildren as well as yard work and gardening; including recognition as an award-winning grower of African Violets. He actively served his church and community and closely followed his Hokies. He was a member of the Shepherd Road Baptist Church in Mulberry, FL.

In addition to his parents, Marvin was preceded in death by his wife, Beulah Jessee Nester; his sister, Gladys Nester Agee; and three brothers: John Nester Jr, Howard Nester, and Dale Nester.

Funeral services will be held at 2:00 p.m. on Tuesday, November 30, 2021 in the Maberry Funeral Home Chapel with Rev.Curtis E. Nester officiating. Interment will follow in the Jacksonville Cemetery. The family will receive friends from Noon until 2 p.m. prior to the service at the funeral home.

In lieu of flowers, memorial contributions may be made to: Lighthouse Ministries, 215 E Magnolia St, Lakeland, FL 33801 (https://www.lighthousemin.org/financial-gifts)