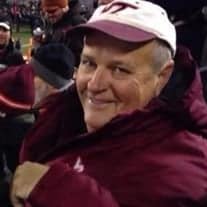 Wallace Jay Nelson, Jr. “Wally” – beloved husband, father, papa, brother, uncle and dear friend – left his earthly body on January 28, 2022, to be with his Lord and Savior. He is reunited with his loving and devoted parents, Wallace and Helen Nelson, and proud in-laws, Donald and Loretta Greer. An abundance of four-legged friends were also there to greet him, most notably his “Callie dog.”

Wally was born in Arlington, VA, unknowingly a stone’s throw away from his future wife, Heather, in McLean. With Wally’s love for the scenic back roads and Heather’s sense of direction, it only took them 35 years to find each other. But when they did, it was truly a match made in heaven.

From Arlington, Wally and his family moved to the Fox Hill area of Hampton, VA, where he and his loyal sister, Jane, grew up. Ever involved in the community, Wally developed a love of sports, being coached throughout his childhood by his father, Wallace Sr. That legacy and commitment stuck with him as he went on to coach his own children, ranging from the infamous 0-12 Rec basketball season to AAU road trips where he took on the role of coach, chauffeur, and mentor. His mentorship extended beyond the basketball court as he provided guidance, support, and advice to many throughout his life.

After graduating from Kecoughtan High, Wally proudly went on to earn a Bachelor of Arts in Economics from Emory & Henry College. He later completed the Young Managers Program through the University of Virginia’s Colgate Darden School of Business, as well as The Levinson Institute Leadership Program. While he was immensely proud of his education, Wally lived his life honoring four basic principles: Faith, Family, Friends, and Fellowship.

Like his parents before him, Wally was a Good and Faithful servant, embodying what it meant to be a man of God. As a student, his faith was nurtured by Emory & Henry, a Methodist college, and he proudly supported his alma mater in every way, from football to fundraising. As a father, he was the faith-leader of his family, raising his children in the Methodist church. He instilled the power of communal prayer, which was practiced at every meal – with all gathered hand-in-hand, acknowledging our many blessings in thanks and gratitude.

While at Emory & Henry, Wally used his talents working as a line cook in the dining halls, nourishing his classmates with food, conversation, and friendship. From those beginnings, Wally crafted his own brand of fellowship, one he is revered for to this day. Wally thrived on bringing people together, whether for a meal, a celebration, or a Virginia Tech tailgate. He truly never met a stranger. He loved cooking as it was an opportunity to serve and be with others. This spanned from communing over a giant Wally breakfast to the famous “Wally’s Tech Tailgate Triage” at Hokie football games.

Wally’s aptly named tailgate saw the purchase of not one, but two different ambulances (neither of which routinely started) serving as home base for many rousing, joyous get-togethers, despite the outcome of the game. Wally made sure anyone who stopped by felt welcomed into the tailgate family. He made it a point to have them return game after game, adding to his growing network of new friends.

Outside of numerous radio appearances as “Tailgate of the Week” on 105.3 The Bear: Flagship Station for Virginia Tech Athletics, Wally’s life was filled with accomplishments.

His professional life began at Burlington Industries, where he became the youngest ever plant supervisor. While at Burlington, he sharpened his professional tools, laying the foundation for an esteemed career in the commercial insurance industry that spanned more than three decades, most recently as the Vice President of SIA Group. Wally’s professional motivation, combined with his love for continuing education, further led to his CIC and PWCA accreditations. Over the course of Wally’s career, his business connections blossomed into lifelong friendships – a testament to his ability to build and nurture meaningful relationships.

Wally committed himself to the betterment of his southwest Virginia community. He demonstrated his leadership skills in the Blacksburg Partnership, Junior Achievement, and the Roanoke Valley Regional Chamber of Commerce, where he served as president of the Backbone Club, the group’s recruitment arm. He spearheaded the effort