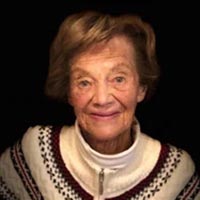 Matilda Cecile (Addor) Nechwort, age 97, passed away May 8, 2020 after a brief decline following a hospital stay at the beginning of 2020. She was born on March 20, 1923 in Misiones, Argentina to Ernest Francois Addor and Helene Pitton.

Cecile was a first generation Argentine, her parents having emigrated to South America from Switzerland in 1909. She grew up on rural plantations in Argentina and Paraguay where her father worked as Administrator. With her two older sisters and twin, she was home-schooled in various subjects by their mother and became fluent in Spanish, French, and English.

Her first marriage resulted in two children, Irene and Jerry. After her husband Federico Schmid died, she ultimately remarried an American civil engineer, George Nechwort, who was in Argentina building roads and bridges. They later moved to Waterville, New York in 1968 where she lived with her husband on their farm until his passing in 2015. She then moved to Virginia and lived with her daughter and son-in-law until she passed away in Blacksburg, Va.

Cecile exemplified the gentleness, sweetness and humorous zest for life that comes from God. She possessed a natural forgiving heart. Cecile was an excellent example of God’s intention of a life steeped in Works and Faith. Never one for public displays of her own talents or achievements, she moved through life with the natural Grace of God. With very little focus on self and a tremendous focus on the needs and desires of others, it was never about her. Money was for spending on others. That made her happy. She brought a “joie de vivre” to the moment and shared that moment with those she loved. The world is a poorer place without her presence. We who knew her are blessed.
Cecile was preceded in death by her parents, her sisters Evelyn, Suzanne, and Mado, her husbands Federico Schmid and George Nechwort. She is survived by her daughter Irene C. (Schmid) Furman of Blacksburg, Va., her son Jerry Schmid of Syracuse, NY, her step-son George Nechwort, Jr. of Sangerfield, NY, her step-daughter Patricia Doherty of Syrna, FL and their families numbering 8 grandchildren and 11 great-grandchildren with multiple cousins, nephews and nieces.

Funeral services TBA – we intend to have a funeral service for Cecile at St Mary Catholic Church, Blacksburg, Va in the summertime when out-of-town friends and family can attend, assuming the Covid-19 restrictions permit it. Date and time to be announced later. Information will be in the St Mary Bulletin when we set one.
In lieu of flowers, please make a donation to: Little Sisters of the Poor: https://baltpublications.weshareonline.org/ws/opportunities/GiftInMemory OR
Food for the Poor: https://secure.foodforthepoor.org/site/Donation2?df_id=16361&16361.donation=form1