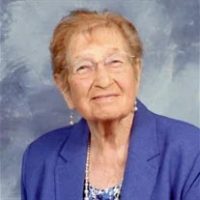 Marcella L. Myers, 92, of Christiansburg, went home to be with her Lord on Wednesday, December 11, 2019. She was born in Marfrance, West Virginia, to the late John and Rosie Lee.

In lieu of flowers, the family suggests memorial donations to the Alzheimer’s Association or a charity of your choice.