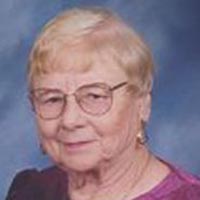 She was preceded in death by her parents, Rosa and Tilson Lewis; Steve Myers, her husband of 69 years; son, Leon Myers; five brothers; and four sisters.

Belle had a vast and varied career. She worked for the United States Postal Service, taught school in Pikeville, Ky., worked in a lab for Hercules Powder and at the age of 60 purchased her own Photo Finishing business. She was the caregiver for many years for her mother and sister, Gladys. She was very creative and enjoyed crocheting and sewing. She was an excellent seamstress and had won dozens of first place Blue Ribbons at the New River County Fair over the years. But her pride and joy were her grandchildren, Greg and Scott. She gladly gave her time and energy to being with her “two boys.” The three of them were mischief makers and you never you knew what they were up to. She was a member of the First United Methodist Church of Pulaski, Va., since 1950.

Funeral Services will be held at Stevens Funeral Home at 1 p.m. on Wednesday, August 12, 2015. There will be a one hour visitation starting at noon with the funeral beginning at 1 p.m. Burial will be at Highland Memory Gardens in Dublin, Va., following the funeral service.