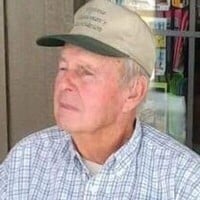 Willie Junior Muse of Christiansburg, Virginia entered his heavenly home on February 14, 2022. Junior was born in Pittsylvania County, Virginia on August 29, 1931 to John Swanson and Mary Muse on the family farm in Penhook.

Junior was married to Lola Francis Muse for 45 years until her death in 1999. He was preceded in death by siblings Claude Muse, Dudley Muse, Clark Muse, Monsey Muse, Francis Muse, Hazel Ray, and his beloved border collie, Maggie.

Junior began working on the family tobacco farm at a very young age helping to grow crops and milking cows. After leaving the farm, he joined the United States Air Force and was promoted to Staff Sargent while serving in the Korean Conflict and was honorably discharged in 1956. Junior started selling produce throughout West Virginia, North Carolina and Virginia before settling in Christiansburg and opening the B & M Market that was well known for some of the best produce and fresh meats in the area. While working in his market on a daily basis, he began farming and raised hogs and sheep while concentrating on his cow calf operation. Junior was supportive of his family and was a volunteer 4-H leader in Montgomery County helping his children with their livestock projects and taking time off from work to take them to livestock shows throughout Virginia. Junior was a member of Fellowship Baptist Church where he enjoyed the fellowship and word of the Lord.

The family will receive friends from 11:30 a.m. until 2 p.m. on Friday, February 18, 2022 at the Mullins Funeral Home in Radford. Funeral services will begin at 2 p.m. with Pastor James Bradley officiating. Interment with full military honors will follow in the Southwest Virginia Veterans Cemetery in Dublin.

The Muse family is in the care of Mullins Funeral Home & Crematory in Radford, Virginia. www.mullinsfuneralhome.com