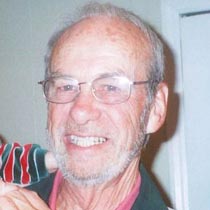 Monsey Haywood Muse, 80, of Dublin, passed away Saturday, March 12, 2016. He was known as an avid golfer, competitor and friend to all. He served for the United States Air Force in his early years, and made a career as a “Little Debbie Man” and also worked at Draper Golf Course for many years.

He was preceded in death by his parents, John Swanson and Mary Elizabeth Muse. He is survived by his children, Michael Haywood Muse, and Jeffrey Dale (Pam) Muse; brothers, Clark (Pauline) Muse and Junior Muse; and his grandchildren, Jake, Cooper, Madison and Cade Muse.

Funeral services will be held 11 a.m. Wednesday, March 16, 2016, at the Radford Church of Christ with the Rev. John Croft and Rudy Shelburn officiating.

The family will receive friends 5 to 7 p.m. Tuesday at the funeral home. The graveside service will take place privately.

The Muse family is in the care of Mullins Funeral Home & Crematory in Radford.www.mullinsfuneralhome.com