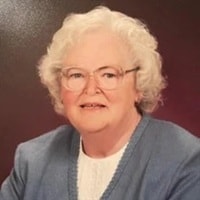 Evelyn June Murphy, age 87, died on Friday, March 4, 2022, at Gainesville Health and Rehab in Gainesville, Va. Evelyn was born on June 10, 1935, in Arlington Va. to Everett Timmons and Katherine Rusk.

On September 5, 1953, she married the love of her life James Frank Murphy. Evelyn spent the bulk of her life taking care of her family. Her interests included quilting, sewing and she had a love of cooking. Evelyn was a loving daughter, sister, wife, mother, grandmother, and great grandmother.

She is preceded in death by her husband Frank Murphy. Her eldest son Jimmy and his wife Terry as well as her youngest son David and wife Janice.

A Graveside service will take place at 11:00 a.m. Friday, March 11, 2022, at Oakwood Cemetery, Pulaski, Virginia with Rev. Frank Peters officiating. The family will be leaving in procession from Bower Funeral Home at 10:30 a.m. to Oakwood Cemetery.

In lieu of flowers, the family ask that a memorial donation be made to either St. Jude’s Children Hospital or to your local cat rescue.