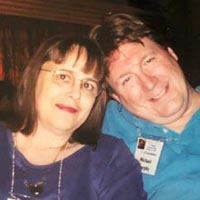 Beverly (Bev) Lugar Murphy, age 69 of Charlotte, NC died Sunday, January 10, 2021 at Atrium Health University Hospital in Charlotte. She was born on September 5, 1951 in Waynesboro, VA, and was the daughter of the late Mildred Lucille Via Lugar and Frank Jackson Lugar, Jr.

Bev was a loving wife, mother, Librarian, and homemaker. She enjoyed music and reading. She was an avid gardener, and had become a genius with grass and flowers. Bev also crafted homemade beeswax candles for family and friends.

In addition to her parents, she was preceded in death by a grandchild, Timothy Jackson Pekarek in 2012.

Mrs. Murphy was cremated and the family will announce a service at a later date. Online condolences may be sent to the family by visiting www.seaglefuneralhome.com Arrangements by Seagle Funeral Home, Pulaski, VA.