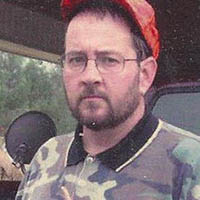 James Clyde (J.C.) Mullins, Jr., 52 of Pearisburg, went home to join his mother in Glory on Sunday, June 3rd, 2018. A lifelong resident of Giles County, he was born on March 23rd, 1966 and was the son of James Clyde Mullins, Sr. and the late Vallery Hughes Mullins.

In addition to his mother, he was preceded in death by his grandparents, David L. Mullins and wife Margaret D. Hale Mullins, and Clayburn Hughes and wife Irene Conley Hughes.

J.C. was a 1984 graduate of Narrows High School, was self-employed throughout his life. He loved the outdoors, gardening, hunting and fishing. He was also an avid Dallas Cowboys and Virginia Tech Hokies fan.

In addition to his father, he is survived by two brothers, Michael Mullins and George Wynes of Blacksburg, Bill Mullins and Ashley Long of Narrows; two special nephews, Chase Mullins and Ryan Brinkley; a special niece, Kayleigh Brinkley, that he loved and adored; numerous aunts, uncles, cousins, and many friends.