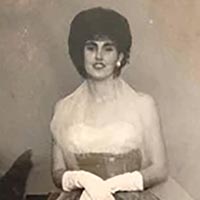 It is with great sadness that the family of Marvel Violet Muhonen, née Grasser, announces her passing on March 12, 2020 at the age of 83. Marvel spent the last months of her life in Blacksburg, VA battling breast cancer in the care of her daughter, Tamara Shimozono.

Predeceased by her husband of 60 years in 2018, Marvel had recently been living with her children and grandchildren across the country. She was a beloved mother, grandmother, sister, minister, evangelist, and friend.

Marvel was an Idaho woman through and through.  Born December 10, 1936 to Harvey and Violet Grasser, née Carr, she was raised on her grandfather’s homestead in Orofino, ID with her sister, Louise. Growing up, Marvel shared a special bond with her nearby grandparents and cousins. She worked on her parents’ ranch, as a hospital volunteer, and for the U.S. Forest Service, spending summers with her family at the “lookout.”  Marvel graduated from Orofino High School then earned a BA in Education at the University of Idaho, where she met Paul Frederick Muhonen, whom she married in 1957.

After college, Paul began his career with International Business Machines (IBM) in Boise, where Marvel taught English until they started their family in 1959.  Marvel’s inner beauty shined without, and she was selected as a Princess at Idaho’s Centennial celebration in 1963.

Paul’s job took the family all across the country, to Poughkeepsie, NY, to Los Angeles and San Jose, CA, and finally back to Pocatello, ID. After Paul retired from IBM, he and Marvel moved back to Boise, where they spent their golden years tending their gorgeous flower gardens and enjoying visitors at their lovely home.  They loved spending summers at their Orofino ranch, picking huckleberries, cherries, and morels, attending Lumberjack Days, and spending time with family and friends.

Marvel was well known for her labor of love in the kitchen, from her luscious baking (pies and cinnamon rolls were her specialty) to preparing sumptuous dinners for family and friends.  An intrepid crocheter, she spent countless hours creating elaborate afghans for her children and grandchildren. Marvel was also masterful with the pen. She enjoyed writing clever poems for her children and grandchildren, and authored dozens of gospel tracts and newsletters for worldwide distribution.

Unwavering in her Christian faith, Marvel was known for her generosity and positivity. She donated to feed and clothe the needy and shipped dozens of boxes of apparel to the poor overseas. She aspired to live and teach determination, perseverance, faith, hope, and forgiveness.  “Let bygones be bygones,” she often said. Marvel wore out dozens of King James Bibles over the years, studying and writing, modeling her life from the inspiration she drew from the word of God.  She wrote in the cover of her last Bible, “Love is the only House that is big enough for all the pain in this World.”  Through the end of her days, Marvel spent her time finding ways to help those she loved, and with her last breath praised the Lord in all things.

Marvel will be lovingly remembered by her 10 children: Gregory (Pamela) Muhonen, of Loveland, CO, Michael (Linda) Muhonen, of Corona Del Mar, CA, Christian (Wendy) Muhonen of Pocatello, ID, Anna Vaughn of Loveland, CO, Tamara (Mark) Shimozono, of Blacksburg, VA, Stephen (Jennifer) Muhonen of Chubbuck, ID, Timothy (Heather) Muhonen of Eagle Point, Oregon, Martina (Michael) DelleDonne of Bolton, ON, Canada, Rachael (Ken) Franklin of Aliso Viejo, CA, and Serena Occhino of Odenton, MD, and by her sister, Louise Beavert, of Clarkston, WA.  Marvel will also be fondly remembered by her 27 grandchildren, three great-grandchildren, her nieces and nephews, and by her “Nigerian son,” Imeh Johnson of Houston, TX. Marvel was preceded in death by her parents and by her husband.

Condolences can be shared online at https://www.hornefuneralservice.com. The family will host a memorial service and celebration of Marvel’s life well lived this summer in Orofino; details will be forthcoming.

A charitable memorial fund has been set up in Marvel’s honor at Children’s Hospital of Orange County, CA. Marvel dedicated her life to raising children and helping the disadvantaged. Knowing other children were being helped would make her most happy. Donations can be made online at www.choc.org/donate (enter amount, select option “Other” and type in “Marvel Muhonen Memorial Fund.”). Donations may also be sent to Good Samaritan Hospice of the New River Valley, which cared for her during her final months.
GOOD SAMARITAN HOSPICE
1160 MOOSE DRIVE
CHRISTIANSBURG, VA 24073