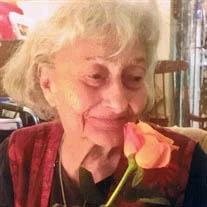 On April 21, 2022, at the age of 95, Alwyn Moss left this life and the Earth she loved so deeply. She leaves behind several cousins and a multitude of friends who cherished and loved her. These include members of the Quaker community of the Blacksburg Friends Meeting, and neighbors at Warm Hearth Village. Alwyn had a long, rich, and interesting life—as a writer, artist, teacher, and activist.

She was born and grew up in New York City. She graduated from Antioch College having majored in English and Theater, then studied anthropology at the University of California in Los Angeles. Back in New York, she worked as a staff writer for Mademoiselle and freelanced for other magazines as well. She was married briefly.

When she was around 30 she went to live in Italy—to write and to study art. She published her first book at age 36—Shaping a New World, a Biography of Margaret Mead. She also lived in England for a time, where she worked at the London Zoo next to the wolf enclosure. She also trained in the Waldorf method of education, which stresses art and nature in educating young children.

After having been away for 11 years, she returned to the US, and embarked on a new journey. She was now a Quaker, an artist, and a kindergarten teacher. She became a founding teacher of the Blue Mountain School in Floyd, and one of the first people to bring Waldorf education to the area. She also became a tireless crusader for environmental and animal rights.

After she moved to Blacksburg in 1987, she quickly became involved in local environmental and peace issues. And she began writing her famous commentaries for The Roanoke Times and other papers. One of her most important accomplishments was forming the Friends of the Brown Farm group, which resulted in the preservation of a large acreage of farm land which became Heritage Park. Over the years she took on many issues, such as the protection of old stately trees, beavers, song birds, and public transportation; and the opposition to hunting, cruelty to animals, war, and waste. One of her great loves was cats—especially feral cats, whom she fiercely protected, defended, fed, and wrote about.

Alwyn used her writing skills to champion the earth and its non-human inhabitants throughout a good part of her adult life. She was particularly prolific in her 80s, despite struggling with many health issues. Her booklet To Love the Earth: A New Way of Being Human on This Planet came out when she was 82, followed by Remembering their Names, a collection of nature poems. She also contributed to several newsletters. Even as she became less able to manage the technology involved with writing, she continued publishing commentaries until she was 90. Many of these have been gathered into a binder as part of her legacy.

Also at 90, Alwyn published her notable book Never Love a Feral Cat—a subject particularly dear to her heart. Later she added a section of personal poems to her volume of nature poems, renaming the collection, Remembering their Names–A Gathering Time.

Alwyn was a true original. Everyone who came in contact with her immediately recognized this. It showed in her way of dressing. Her way of speaking. Even in her handwriting and the way she communicated with friends. She would send interesting notes and cards, often embellished with little watercolor paintings—the messages always grateful, original, and beautiful.

Alwyn did things on her own terms. She even died according to her principles, at home, in her own bed. She was buried, un-embalmed, in a cardboard box, so she could be close to the earth.
Alwyn was a wonderful example of authentic living. Of having purpose. Of aging with dignity. And of contributing what you can up to the very end.

Now Alwyn is returned to the Earth she loved so well.

We will miss her.

Donations may be made in Alwyn’s honor at maraelephantproject.org. The Mara Elephant Project was Alwyn’s most recent cause.