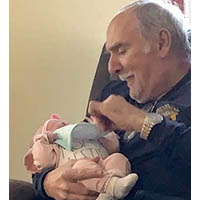 Howard Daniel (Danny) Morris, 66 of Pearisburg, VA went to be with the Lord on Tuesday, August 18, 2020. Danny was born on January 31, 1954 in Pearisburg and was a son of the late William Howard Morris and Barbara Runions Morris. Besides his parents, he was preceded in death by his wife of 25 years, Sonya Taylor Morris.

Danny was a U.S. Army Veteran and a retired employee of Federal Mogul in Blacksburg with 25 years of service. He loved the outdoors and was an avid hunter.