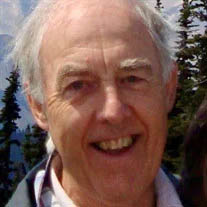 John Moore was born on the Wirral peninsula of North West England to David Harold Moore and Dorothy Payne. He was raised in Bebington in the home of his grandparents, Samuel and Mary Payne. He went to the elite Birkenhead School on a County Council scholarship following the Eleven Plus Exam. His degrees are in Mechanical Engineering: B. Sc. from Imperial College, London; S.M and Sc. D, from the Massachusetts Institute of Technology. He met his wife Joan in the Gas Turbine Lab. at M.I.T.

His technical passion was three-dimensional fluid flow in turbomachinery. He received the ASME Gas Turbine Power Award for his doctoral experiments and innovative computations explaining the flow in a rotating passage. After 4 years working with a combustion group at the General Electric Research Lab. in Niskayuna, N.Y., John returned to England to take a 5 year teaching position at Cambridge University. Assigned to teach Thermodynamics, he added this to his fluid flow expertise to develop computational methods (now also with the aid of his wife Joan) that could predict performance of centrifugal impellers in the classic form of a temperature-entropy diagram. This was applied by the Rolls-Royce large engine division to significantly improve the turbine in their RB211 jet engine used by many airlines.
After another year working in combustion, this time on computations for Rolls-Royce in Bristol, John returned to the United States in 1979 to become a Professor of Mechanical Engineering at Virginia Tech. He permanently settled in Ellett Valley east of Blacksburg. Teaching and research continued later adding analysis of rocket pumps, both for the French (SEP) and for NASA. He lectured at many professional development short courses in both Europe and the U.S. He received the ASME IGTI Education Committee Best Paper Award in 1996.

John’s passion for golf started with his grandfather shortening and giving him a 5-iron on his 4th birthday. As John would say, “golf courses are in beautiful places.” John enjoyed hiking in the mountains, in Wales near where he grew up, a trip to the Pyrenees when in college, New Hampshire when at M.I.T, and right outside his door in Ellett Valley.

Taking early retirement from Virginia Tech in the late 1990’s, John became president of the Blacksburg Country Club Homeowner’s association. He decided to research the early settlers of Ellett Valley to celebrate the year 2000. This turned into a passion for local history. He is well-known for regaling the neighbors with stories of the early settlers and the great flood that occurred in the 1700’s. John and Joan also went on many family history trips, researching both his and Joan’s family history.

John is preceded in death by his son David Moore. He is survived by his wife of 52 years Joan, his step-son Stephen Kukolich, Stephen’s wife Linda, and their children, Stephanie and Peter. If you wish to make a donation in his name, consider the Montgomery County Emergency Assistance Program, which he supported for decades. Following John’s wishes, due to the pandemic, there will be a private burial service. Memories to share may be left on the McCoy Funeral Home website.