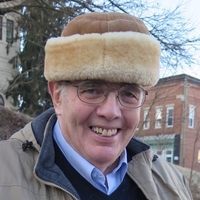 Charles Dennis Moody, Jr., known to all as Dennis, died at his home in Radford on Wednesday, October 7, 2020. He was born January 25, 1946 in Louisville, Ky., the son of Charles Dennis and Alma Eugenie “Gene” Smith Moody.

He grew up in Blacksburg, Va. where his father was a professor in the accounting department at Virginia Tech. He was a graduate of Blacksburg High School. He served in the U. S. Army in the 173rd Airborne Brigade during the Vietnam Era where he attained the rank of First Lieutenant and received a Bronze Star.

After the war, he earned a BS in Accounting from Virginia Tech and pursued a life-long career as a CPA in Radford, Va. He had a world class sense of humor and a kind heart, was an avid reader and enjoyed the peace of fishing above all else.

In lieu of flowers, please make a donation in Dennis’s name to the charity of your choice.

The Moody family is in the care of Mullins Funeral Home & Crematory in Radford, Virginia. www.mullinsfuneralhome.com

In the infamous words of Dennis, “I’m done with you, and I love you, donchaknow.”