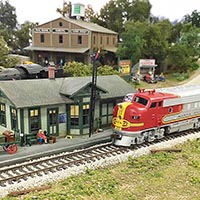 On October 27, 2014 John Robert “Bob” Montgomery departed Christiansburg on the long black train to the depot in Heaven. Bob was an avid train enthusiast. He spent several vacations traveling to look at trains and their stations.

Bob was born on May 25, 1936 in Bluefield, WV to Horace and Beatrice White Montgomery. After being graduated from Beaver High School in Bluefield, WV in 1954 he joined the Army. He served the Army in France from 1955 to 1958. His sisters, brother and their spouses, Virginia Tucker, Mary and Reed Ewing and Horace and Edna Montgomery preceded him to heaven.

Bob enjoyed not only his trains but also making wooden toys and tinkering with anything that could be built or taken apart. He loved fixing things.

He married his love, Florence Porterfield Montgomery 54 years ago and together they had two beautiful daughters, Helen (Allen) Forbes of Garner, NC and Bobbi (Brian) Myers of Newport, VA.

The most important loves to Bob were his Grandchildren. Whenever they would come to see him he would light up and tell you “His kids” were coming. His kids, Jacob and Megan Forbes of Garner, NC and Haley Myers of Newport, VA will miss their Paw Paw and his stories.

He had many nieces and nephews that he loved as his own. There are special neighbors that were always there for him and Florence that he cherished.

Services for Bob will be Saturday, November 1, 2014 at 2:00 pm with visitation with the family prior to the service starting at 1:00 pm at Sherry Memorial Christian Church, Mountain Lake Road, Newport, VA.