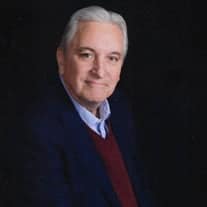 Richard Walter Monroe, age 77, of Blacksburg, Virginia, passed away peacefully on Monday, October 18, 2021. Born August 25,1944, he was the son of the late Stanley Searle Monroe and Ruth Hunaker Monroe. He is preceded in death by his sister Judith Ann Monroe and brother William Matthew Monroe.

He is a graduate of Annandale High School (1962), where he was a star athlete and Virginia Tech (1966). Richard earned a bachelor’s degree in Business Management and a regular Army commission as a Second Lieutenant in the Armored Cavalry. While at Virginia Tech, he was assigned to H Company. He was a Regimental S-3 operations officer and a leader in the Corps of Cadets. He was also a member of the Color Guard, the VPI Cotillion Club and many other honorary military societies.

After graduation from Virginia Tech, Richard attended the Armor Officer Basic Leaders Course in Ft. Knox, Kentucky with a follow-on assignment to the 3rd Squadron, 14th Armored Cavalry Regiment in Bad Hersfeld, Germany. He served there for two years as a Troop Commander, Staff Officer and Squadron Executive Officer. During this period, he was promoted to the rank of Captain.

After Germany, he was deployed to Vietnam as an Advisor to the South Vietnamese 6th Armored Cavalry. While in Vietnam, his unit conducted daily reconnaissance missions to protect and support other infantry companies. He rode on an armored carrier and was involved in several enemy fire fights and major battles which earned him a Bronze Star. At the end of this tour, he left the Army to pursue a civilian career.

In February of 1970, Richard was hired by Reynolds Metals Company, a Richmond, Virginia based international aluminum company. After 26 years with Reynolds, he joined Owens Corning for six years and finally a private investment group for four years. After 36 years in the corporate world and four years of military service, Richard retired with his wife Mary Margaret to Blacksburg, Virginia.

While retired in Blacksburg, Richard served as Board Secretary and General Director to the Corp of Cadets Alumni Association for seven years. He also served as President, Vice President and Treasurer of the Virginia Tech Cotillion Club Alumni Association over the course of a 13 year period. He was also a member of Blacksburg United Methodist Church. Richard will be remembered for his quick witted sense of humor, his endless generosity and his love for the great outdoors. He often spoke of his love and respect for the life-long foundation that his experience in the Corps of Cadets afforded him.

The family is grateful for the love and support from family, friends and many medical professionals. A memorial service will be held in honor of Richard on November 17, 2021 at 2:30 PM, preceded by a visitation at 2:00 PM at Blacksburg United Methodist Church. The family requests that you kindly wear a mask.