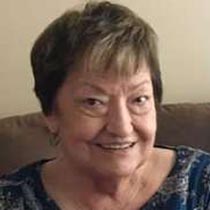 Linda Jerilynn Jacques Mitchell, 76, of Narrows, went to be with the Lord on February 21st, 2018. She was born on February 20, 1942 in Salem, Massachusetts to the late William Thomas Jacques and the late Ethel Cordts-Jacques Robinson. In addition to her parents, she was preceded in death by her brothers Edward S Gwin, John A Gwin, and Robert H. Jacques.

She graduated from Beverly High School in Beverly, Mass in 1959 then met her husband who was in the Army, soon after they married and moved to Rich Creek, VA in 1963. She worked at Celanese from 1963 until she retired in 1995. She was an avid reader but mostly enjoyed being with her family and spoiling her grandchildren and great-grandchildren. She also enjoyed spending time with special friends Mary-Ellen Johnston, Pat Dennis, Bonnie Dunford and Juanita Lucas

In lieu of flowers the family suggests that contributions be made in her memory to Cancer, Kids, and Christmas, 1815 Old Wolf Creek Road, Narrows, VA 24124 or deposit at NBB.