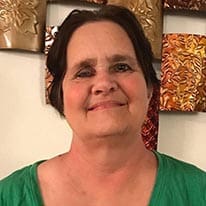 Jane Lee Sheldon Mitchell, 63, of Pearisburg, VA, peacefully went to be with the Lord on Saturday, November 27, 2021, at UVA Medical Center in Charlottesville, VA. Jane was born on March 9, 1958, in Richmond, VA and was a daughter of the late Luther Pitzer Sheldon and Nancy Lee Nutter Sheldon. Besides her parents, she was preceded in death by infant son, Matthew James Mitchell, two brothers, Wesley Sheldon and Ray Mack Sheldon and her aunt, Louise Croy.

Jane enjoyed most being a loving mother and grandmother. She enjoyed cooking for her family, going fishing, country music, especially George Strait. She said her greatest gift in life were her three daughters, her five grandchildren, a great granddaughter and the gift of a donated kidney by a total stranger.