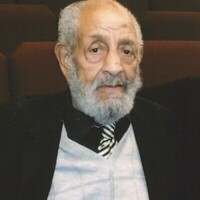 Frederick “Fred” Duddley Mitchell, was born in New River, Virginia on August 20, 1932 and left this earthly world on August 8, 2021 peacefully at his home in Philadelphia, Penn.

So many stories told about Fred that when he gave his own children an allowance, he also gave an allowance to a host of nieces and nephews that looked up to him as a father figure.

Fred served his country in the branch of the U. S. Army from February 1951 until his honorable discharge in January 1954. He would often thru the years tell stories of how he parachuted out of planes and his many other adventures while serving.

After his union to Betty, they moved and started a life in Philadelphia, Penn. where Fred started his own business of window and rug cleaning until he retired.

He was an avid fisherman, often going deep sea fishing from a boat or just from a bank.

Fred was very involved with his community. He was loved by many friends and neighbors. He never met a stranger, and was always willing to give a hand. His door was always open.

Fred will be sadly missed but we are comforted in knowing that he lived the life he loved.

The family will receive friends from 11 am until 12 pm on Saturday, August 21, 2021 at the Mullins Funeral Home in Radford, Va. A Celebration of Fred’s Life will begin at 12 noon with Rev. Tommie Page officiating. Interment will follow in the New River Cemetery.

The Mitchell family is in the care of the Mullins Funeral Home & Crematory of Radford, Virginia. www.mullinsfuneralhome.com