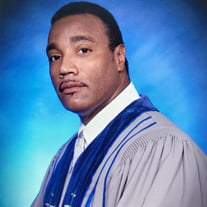 The heart of a man plans his ways, but the Lord orders his steps (Proverbs 16:9) and the Lord called his son, Apostle David Junior Mitchell 59, of Christiansburg, Virginia home on July 1, 2021. He was born in Winston Salem, North Carolina on April 20, 1962, to the late Raymond Julius Mitchell and Mary Alice Covington Mitchell.

He is survived by his wife Darlene Beasley Mitchell of 13 years, stepson Irvin. White II, stepdaughter Nakecia English, Brother Raymond Sutherland Mitchell Jr., sister Mary Horton (Christopher), sister Linda Peay, and sister Lucy Mitchell, three grandchildren, Shaelyn, Kiara and Kaiden, and a host of nieces and nephews. The list of special people in his life would be too many to name.

David answered the call to minister at the age of 12 and was a God-fearing man, devoted husband and loved both his home and church families. He was a 10-year veteran of the United States Army where he served as a military chaplain and drill sergeant and carried the tradition of service into the church. Ordained Apostle April 25th, 2014, New Covenant Ministries, United Holy Church, 30 years Pastor, 42 years ministry, ordained Bishop 2003, ordained elder in 1984. Pastor and builder of 3 churches. His favorite quote was in always nice to be nice.

Apostle Mitchell was a man of vision who founded two food banks in Winston Salem North Carolina, Fountain of Life Ministries, led a street ministry. He used his skills as a drill sergeant in working with the youth and founded step teams in Christiansburg and in West Virginia. David was a man that allowed his life to speak for him. In addition to being a visionary, preacher and teacher, David Mitchell was a builder. He built bridges for Haymes Construction Incorporated under the supervision of a man that he admired, Mr. Ranny Odell, but the most important bridges he built were the ones that connected people to Christ.

David Mitchel is described by his wife as amazing, dedicated, God-fearing, anointed, and full of fire. David was hard working but commented that the part of his workday he looked forward to the most was coming home to his wife. Knowing Darlene and David is knowing what love looks like. He was forgiving, unstoppable, and a believer: one that handed his troubles over to God. He was prepared to meet his maker. He said he was ready whenever God called him home.

The family will be receiving friends and loved ones for visitation on Friday, July 9 from 6pm to 8pm at McCoy Funeral Home Chapel (150 Country Club Dr. SW Blacksburg, VA 24060). Reflections from guests can be shared from 7pm to 8pm. A private funeral for family Saturday, July 10 at 2pm. The family respectfully requests that all in attendance please wear masks. In lieu of flowers, the family prefers donations to be made in Elder Mitchell’s honor to New Beginnings Church, 613 Carterville Heights Road, Wytheville Virginia, 24382.