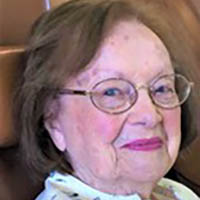 Merrily Louise (Lowry) Mistele passed from death into eternal life on December 1, 2020. She was born July 12, 1924 to Fred and Verna (Black) Lowry in Oklahoma City, OK. She was preceded in death by her first husband, Marvin Woodcock, her second husband, Robert Mistele, her sister Frances (Lowry) Winfrey and son-in-law Michael Touscany.

Merrily graduated high school early and became a legal secretary for attorney Herman Mercer. She then married her high school sweetheart Marvin Woodcock who served in the United States Air Force during World War 2 and shot down and died in the Italian Alps. She then met Bob Mistele at church and they were married Nov.2, 1946. Merrily was the wife of baseball player, coach and teacher. Along with raising their 4 children, she used her talents of sewing to good use both for the children and her home. As the children grew and left home she spent hours painting, French heirloom sewing, smocking, rug hooking and wool appliqué. Selling many of her “wares” along the way.

Merrily was also very active in church both in the choir and Pioneer Girls. A favorite was her annual solo of “Sweet Little Jesus Boy” at the Christmas Eve service. She was a member of the Wooley Sheep Rug hooking group in Roanoke and was dearly loved by all who knew her.

Merrily’s relationship with the Lord Jesus Christ was evident in every aspect of her life. Many times sharing with others of God’s faithfulness all through her life. One of her favorite verses she often shared with her grandchildren was 2 Timothy 2:15.

She will be greatly missed but her family that remains eagerly awaits their reunion with her in heaven!!!

The family will be having a private graveside service at a later date.