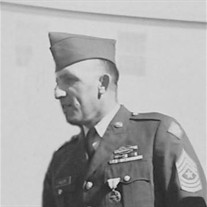 He is survived by his daughter, Donna L. Miller; his companion of many years, JoAnn Linkous; brother, Gene A. Miller and his wife Lena; sister, Barbara A. Robinson; grandchildren, Lori Miller and Frank Brooks, Shana and Chris Reed, Elizabeth Miller, James W. Miller II, Derek and Ashley Hensley; 10 great-grandchildren; and many beloved nieces and nephews.

James Miller joined the United States Army in 1950 and later retired at the rank of Command Sergeant Major. He served one year in Korea with the Fifth Regimental Combat Team. In 1953, he was stationed in Germany where he was assigned to the 18th Combat engineer battalion. He left Germany with wife, Elizabeth Miller, and was assigned to Fort Meade. In 1963, he was assigned to Taiwan (Republic of China) In March 1967, he served in Vietnam with the 69th Engineer Construction Battalion. Following a long military career, he retired in 1970. Later, James worked for the City of Roanoke as a Magistrate. He retired from the City of Roanoke on July 1, 1991.

James loved family, going to auctions and flea markets, traveling, and attending to his garden.

The family sends special thanks to the doctors, nurses, and caregivers at Carilion Roanoke Memorial Hospital ICU Unit Floor 7, and CCU Unit Floor 10. Special thanks and appreciation is extended to Dr. Alan McLuckie, Dr. Fletcher Matthews, and Dr. Molly Rutherford. Thanks and appreciation is also extended to the staff at Brandon Oaks Rehabilitation.

The family will receive friends on Saturday, December 9, 2017, from 12-2 p.m. at Horne Funeral Home. The Funeral Service will begin at 2 p.m. in the Chapel, with Rev. Jube Burk and Rev. Jerry Shepherd officiating. Interment with military honors will follow at the Roselawn Memorial Gardens, Christiansburg.

In lieu of flowers, donations may be made to one of the many Veterans Organizations.