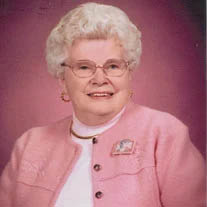 Helen Jeffries Miles, age 102 of Blacksburg, widow of Hugh S. Miles, Jr. , died on July 14th, 2022. Born in Norfolk, she moved to Culpeper in 1922 with her parents, the late Helen M. and John Lewis Jeffries Jr., both Culpeper attorneys. She was also predeceased by a brother, John L. Jeffries, III, also a Culpeper attorney.

In 1946 following World War II, she and Hugh moved to Blacksburg where he resumed his teaching position in the Mechanical Engineering Department of Virginia Tech. Later Helen taught in the English and History departments at Tech for 18 years. She was an advisor to the Tech chapter of Kappa Delta for ten years, a past president of the Tech Faculty Woman’s Club, the Women of Christ Episcopal Church and the Colonial Dames XVII Century. She served as an interpreter at Smithfield Plantation, a volunteer at Montgomery Regional Hospital, and for over 50 years on the Alter Guild of Christ Church. She had been an active member of the DAR, the Blacksburg Sports Club and a bridge club that was founded in 1948.
The Family would like to express their appreciation for the companion ladies of “Warm Hearth at Home”, as well as the staff at Showalter Assisted Living. These ladies were the primary reason that Helen was able to lead a happy and gratified life, even after losing her sight.

Her funeral will be held at Christ Episcopal Church on Sunday, July 17th, 2022 at 2:00PM with Reverend Scott West officiating. The family will receive friends from 1:00 to 2:00PM at the church.