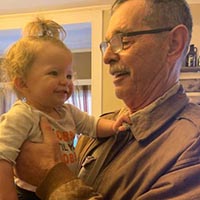 Roger Frank Micklewright, 70, of Narrows, VA, passed away Saturday, January 25, 2020 at Heritage Hall Nursing Home in Rich Creek, VA. Mr. Micklewright was born on June 23, 1949 in Ontario, Canada and was a son of the late George Micklewright and Lydia Sharpe Micklewright.

Besides is parents, he was preceded in death by his wife of 41 years, Audrey Ann Amo Micklewright. He is survived by one daughter, Shana Nikole Micklewright of Pearisburg, one son, Jason Scott Micklewright and wife Tricia of NJ, seven grandchildren, Jacob, Hunter, Colt, Gabriel, Abigail, Nicholas, Noah and one great granddaughter, Salem.

As per Mr. Micklewright’s request, there will not be a memorial service. The family is being served by Givens – Riffe Funeral Service in Narrows, (540) 726-2442, and online at riffefuneralservice.com.