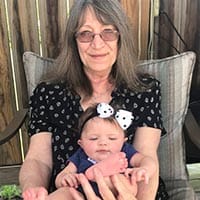 Audrey Ann Amo Micklewright, 65 of Narrows, VA passed away Sunday, June 2, 2019 at Carilion Roanoke Memorial Hospital. Mrs. Micklewright was born on June 3, 1953 in Pearisburg and was a daughter of the late Harvey Byron Amo and Mary Elizabeth Morris Amo. Beside her parents, she was preceded in death by one brother Thomas Amo.

As per Mrs. Micklewright’s request, there will not be a memorial service.