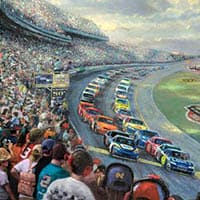 In addition to his parents he was preceded in death by his brother Bernie Leo Meredith.

He is survived by his sister Darlene M. Rorrer, his brothers Ronald Meredith, Charles Meredith and his wife Eleanor, and numerous nieces and nephews.

He was a member of the Church of God of Prophecy.

He retired from the U S Postal Service and had made many friends there and at Nehi bottling and his business JR’s Used Cars. He loved cars, racing and watching NASCAR.

Harry was a generous, kind, man with a heart of gold who always carried a smile on his face. He was well liked and will be missed.

The family would like to give a special thank you to those who showed loving kindness and cared for our father while he was at Heritage Hall.

Stevens Funeral Home will handle arrangements for a private service.

His interment will be at Foster Falls Cemetery.