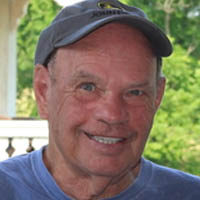 Byron “Barney” Janney Meredith, Jr., of Riner Virginia, at the age of 80, went to be with the Lord on August 12th, 2022. He was at home and surrounded by his loving family.

Barney was one of five children, born and raised on his parent’s dairy farm in Snowville, Virginia. He never lost his love and passion for his old homeplace and a way of life that only a dairy farmer’s child really knows. Something about the pastures, cattle, and John Deere tractors always brought a smile and a sense of meaning to his memories and stories.

He married young to the love of his life, Charlotte, in 1960. While so many things change in the world today, the love and commitment between Barney and Charlotte grew and bloomed like a field of wildflowers. It was and still is beautiful, joyous, and never ending.

Barney attended Virginia Tech, majoring in Dairy Science, and graduating in 1964. Upon graduation Barney went to work for the Valley of Virginia Milk Cooperative (Shenandoah’s Pride), where he would impact this organization for 36 years before transitioning and ending his career with Dean Foods in 2007. Barney made countless contributions to the milk processing industry. He earned the respect and love of employees, suppliers, and peers alike with his honesty, integrity, compassion, and drive for excellence.

Nothing was more important to Barney than his family. He was an amazing husband, father, brother, grandfather, and great grandfather. His love was unconditional, and he cherished every moment he had with all of his family. His children, grandchildren, and great grandchildren all had very loving and special relationships with Papaw. His spirit will always live in them.

As a faithful member of Snowville Christian Church, a special Memorial service will be held there on Saturday, September 10th, at 11:00 AM. It will be followed by a Celebration of Life on the banks of the Little River a few miles away. Barney will be with us in spirit that day as we reflect on and celebrate his life.

In lieu of flowers, the family requests contributions be made to the Alzheimer’s Foundation of America. https://alzfdn.org/support-us/donate/.

The Meredith family is in the care of Mullins Funeral Home & Crematory in Radford. www.mullinsfuneralhome.com