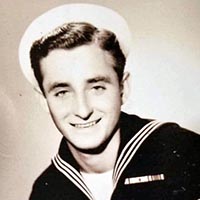 Emory Lee Meredith, age 92, passed away on Saturday, February 8, 2020, at Lewis Gale Montgomery Hospital in Blacksburg, VA. Born May 19, 1927, in Bluefield, WV, he was the son of the late Joseph and Irene Mattox Meredith.

Emory was a World War II and Korean War U.S. Navy Veteran. While in the Navy, he was a member of the Naval Seabees and served on the USS Montrose and USS Jason. After his time in the military, Emory worked at Celanese for 45 years until his retirement. He was a dedicated member of the First Church of God in Rich Creek, VA. He was a lifetime member of the VFW. He served as a volunteer at the Celco Credit Union and loved his family, photography, hunting, and fishing.

Funeral services will be held at 2:00 PM on Wednesday, February 12, 2020, at the Broyles-Shrewsbury Funeral Home Chapel in Peterstown, WV, with Pastor Faye Asbury officiating. Burial will follow at Sunrise Memorial Gardens in Rich Creek, VA. Visitation will be from 1:00 PM until time of services on Wednesday at the funeral home. Online guestbook can be signed or condolences may be sent to the family at www.broyles-shrewsbury.com. Arrangements by Broyles-Shrewsbury Funeral Home, Peterstown, WV.