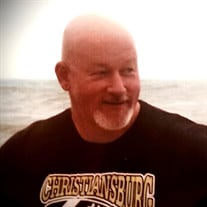 Eldon Cecil Meredith, age 52, of Christiansburg, went to be with his heavenly father Monday, October 11, 2021. He was born in Blacksburg, VA on January 27, 1969 to the late Albert Cecil and Reba Akers Meredith. He was also preceded in death by his sisters, Diane Dove and Beverly McGuire.