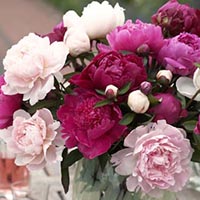 Clotine Mullins Meredith, 92, of Narrows, departed this life on Sunday, April 22, 2007 to walk among God’s beautiful flower garden in heaven.

She was born in Narrows on December 3, 1914, to the late John Franklin (Cleve) Mullins and Nannie Atwood Mullins. In addition to her mother and father, she was preceded in death by her husband, Ruben J. Meredith; one son, Robert C. (Bob) Meredith; five brothers, Bayless, Lee, Everett (Monk), Herbert and Walter Mullins and two sisters, Pauline Evans and Elizabeth Blankenstein, all of Narrows.

Clotine was a life long member of the First Baptist Church in Narrows. She loved the outdoors, growing plants and flowers and sharing them with everyone. She was always there to give her neighbors a helping hand and was giving to people in need. She made friendships with everyone she met and taught her family and friends to embrace the simple things in life.

Funeral services will be held Wednesday, April 25, 2007 at 2 p.m. in the Chapel of Riffe’s Funeral Service in Narrows with the Rev. Eddie Kendall and the Rev. D.J. Chambers officiating. Entombment will follow in Birchlawn Abbey in Pearisburg. The family will receive friends at Riffe’s Funeral Service Tuesday from 6 to 8 p.m. The family requests that those sending memorial contributions, please consider either Bethel Chapel, P.O. Box 444, Pearisburg, Virginia 24134, or the charity of your choice. Online condolence messages to the family can be sent to www.riffes.com.