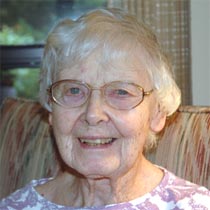 Ruth Elizabeth Taylor Mercier (Betty) of Blacksburg, Virginia died peacefully at the age of 98 on February 15, 2016 at Kroontje Health Care Center, Blacksburg. She was born September 30th 1917 in Springville, PA.

She was preceded in death by her parents Hilland and Bernice Taylor and husband Arnold Mercier. She was survived by her son David, daughter-in-law Laura, grandson Jonathan, brother Lewis Taylor and wife Irene Taylor, nephew Paul, nieces Janet and Patricia.

Betty was a graduate of Syracuse University, worked in advertising for a radio station then earned a teaching certificate and taught at Fenn School in Concord Massachusetts. She was an active member of Blacksburg Presbyterian church until her Alzheimer’s made it difficult to attend. She played Jazz piano and composed music. She had a jazz quartet and held concerts at Warm Hearth Village. She belonged to the League of Women Voters, groups at church, and gave to numerous charities. She enjoyed spending time with her grandson Jonathan, playing golf, round dancing with Arnold, swimming, skiing and liked to go for walks. She was loved by all that knew her.