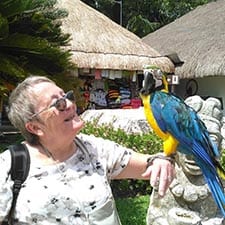 Pamela Jane McWilliams (Wheeler), 66 of Narrows, VA. passed away on May 1st, 2019 at Lewis Gale Hospital Montgomery in Blacksburg, VA. Pam was born May 11th, 1952, in Pearisburg to Mason Edward Wheeler and Dorothy Marie Wheeler (Peck). She is preceded in death by her mother, father, infant brother Timothy, and late husband of 37 years, Kenneth Jackson McWilliams.

Pam was an honors graduate of the Narrows High School Class of 1970 and went on to receive her Associate’s from Virginia Polytechnic Institute. After several years in the workforce, Pam joined the armed forces and served in the U.S. Army for 17 1/2 years, including a peacetime tour in Korea, before returning to Narrows with her husband and children.

Pam was known for her love of horses, geology, ornithology, and astronomy and spent much of her free time volunteering in the community, including an after school mentor program through First United Methodist Church in Narrows. Pam dedicated 20 years of service to Lewis Gale Hospital Montgomery in Blacksburg, where she was remembered by coworkers for her cheerful disposition and sharing how proud she was of her children and grandchildren.

Funeral services will be conducted Friday, June 14, 2019 at 11 am at the Riffe – Givens Funeral Chapel in Narrows with the Rev. Doug Armstrong officiating. The family will receive friends at the funeral chapel from 10 – 11am before the service. There will be a luncheon following at Narrows First United Methodist Church in Narrows.