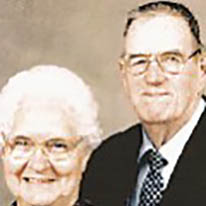 Thomas Truman McPeak, 91, of Hiwassee, Va., passed away on Saturday, July 24, 2010. Born in Carroll County, Va., on April 9, 1919, he was the son of the late Emmitt and Annis Quesenberry McPeak. In addition to his parents, Truman was preceded in death by his wife of 67 years, Irene Jarrells McPeak.

Truman worked for American Pigment Corporation, Hiwassee, Va., for 41 years where he served as Leadman and retired as a Mine Supervisor in 1981. In 1944, during World War II, Truman was called into service. He served with Combat Engineers and later, at the end of the war, he was a War Crimes Investigator. During his service overseas he was stationed in France, Germany, Belgium and Holland. He was discharged from the Army in January 1946 and returned to the Hiwassee mines in April 1946 where he continued to work until January 1948. He then decided to return to school under the GI bill, taking a special course in agriculture at Virginia Polytechnic Institute (VPI).

He operated a farm until October of 1950 when he returned to work in the mines at Hiwassee. He was promoted to Leadman in 1966 and to Mine Supervisor in 1968.

Both Truman and his wife Irene were active in community affairs. They were members of the Community Improvement Club, Community Citizens Watch and the Hiwassee PTA. Truman served as President of both the Community Improvement Club and the PTA. He was one of the citizens of the Hiwassee-Allisonia area who was largely responsible for the formation of the Hiwassee Volunteer Fire Department. He served as the second President of the Volunteer Fire Department.

With Truman’s experience in agriculture, he was a very successful gardener, and always said that working in his garden was his favorite hobby.

In lieu of flowers, the family wishes memorials be made to the National D-Day Memorial Foundation, P.O. Box 77, Bedford, Va. 24523.