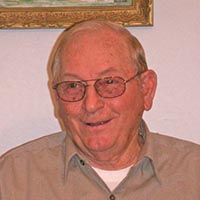 Aaron Jefferson McPeak, Sr., 89, of Radford, VA passed away on October 28, 2020. He was preceded in death by his parents, David Houston McPeak and Maude Virginia Rupe McPeak; by his brothers, Daniel, Harold, James, Henry, Kern and Cloyd, and by his sisters Roberta Sebresos and Alma DeCosta.

He served honorably with the Seventh U.S. Army, 4th Surgical Hospital near Stuttgart, Germany, during the Korean Conflict. He was due to ship out the next day to Korea, when the Armistice was signed. He was happy to run into his brother, Clifford (Elwood) in Germany, not knowing his brother had been stationed there.

He worked at many places over his lifetime, but chiefly at Inland Motor and Federal Mogul. He had a strong work ethic and was happiest when working in the yard or making repairs about the home. He came from a long line of family members who were defined by their charisma, their vitality, courage, strength and their sheer will to survive. He will leave a void in our lives that no one can replace.