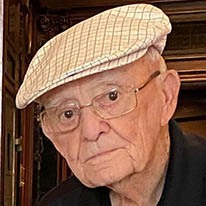 Robert Frank McNally passed away August 17, 2021 at English Meadows in Blacksburg VA. He was 94 years old. Robert was born in June 3, 1927 in Waterloo, Iowa, the son of the late Mary Billings and Nicholas John McNally. He grew up in Winter Park, FL and Bristol VA. He attended Bristol Virginia High School and was a member of the All-City football team. Before graduating in 1947, Robert served two years in the US Navy and was stationed in Peleliu Island in the South Pacific.

Robert graduated from Emory and Henry College in 1951 with a degree in Chemistry. That same year, he married his wife of 68 years, the late Joan Sturgill McNally. Upon graduating with a Doctor of Dental Surgery degree from the Medical College of Virginia in 1955, Robert established his dental practice in Pulaski, VA and served the community for 34 years. During this time, he served on the Pulaski County Planning Commission, and participated in the Y’s Men club. He and Joan were also active members of the First United Methodist Church of Pulaski. Upon retirement, Joan and Robert moved to Mt. Dora, FL in 1990. After moving back to Roanoke in 2001, they joined and were very active with Windsor Hills United Methodist Church.

Robert enjoyed reading, hunting, fishing, airplanes (he earned his pilot license in 1967) and was an avid golfer. In retirement, he learned to make customized golf clubs.

Stevens Funeral Home in Pulaski, Va. is serving the McNally family. Online condolences may be made at www.stevensfuneralhomepulaski.com