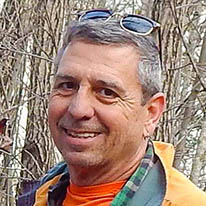 James Michael “Mike” McMillion passed away on August 19th, 2021, from a heart attack. Widely known in southwest Virginia as the Bike Guy or Bike Mike, he pioneered mountain bike trails on Draper Mountain leading a selfless group of volunteers. All told, they devoted thousands of hours to clearing and building an amazing trail system for public enjoyment.

Mike and his wife, Fay Shamanski, married and relocated to Pulaski in 2010 to found and build Pulaski Bikes, a bicycle sales and repair shop. Mike became a prominent ambassador for the town of Pulaski and the surrounding area.

Born in Baltimore, Maryland, Mike was raised in Summersville, West Virginia, to graduate from Nicholas County High School in 1983. Shortly after, he enlisted in the United States Army as an infantryman. Mike earned his Airborne wings, Pathfinder badge, and the Expert Infantryman’s Badge as well as an Associate’s Degree in Business. He served in the 10th Mountain Division and then as an instructor at the Airborne School. He left the Army as a Staff Sergeant in 1992.

Following his Army service, Mike worked in West Virginia and Tennessee, and then served as the director of the Rockville Youth Bike Program for Bikes for the World in the Washington, D.C. area. As part of that work, he also ran the bicycle and pedestrian safety program for ten Rockville, Maryland, elementary schools. It was there he earned his nickname “the Bike Guy” from the children.

Mike was preceded in death by his father, James O. McMillion of Summersville, WV, and nephew Jesse Thomas Apple of Suffolk, VA.

In lieu of flowers, donations may be made to PACC Rescue and/or Friends of Peak Creek. Online condolences may be sent to the family by visiting www.seaglefuneralhome.com Arrangements by Seagle Funeral Home, Pulaski.

The Peace of Wild Things

When despair for the world grows in me
and I wake in the night at the least sound
in fear of what my life and my children’s lives may be,
I go and lie down where the wood drake
rests in his beauty on the water, and the great heron feeds.
I come into the peace of wild things
who do not tax their lives with forethought
of grief. I come into the presence of still water.
And I feel above me the day-blind stars
waiting with their light. For a time
I rest in the grace of the world, and am free.