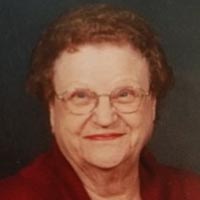 Mabel Rebecca (Gunn) McLeod, age 94 of Dublin, died Saturday, September 1, 2018 at her residence. She was born in Pulaski on August 18, 1924 and was the daughter of the late Nora Alice Byrd Gunn and Robert C. Gunn.

Mabel was a lifetime member of the New Dublin Presbyterian Church and attended Dublin United Methodist Church, and retired from the Pulaski County Public Schools as a bookkeeper.

In addition to her parents, she was preceded in death by her husband, Donald Alan McLeod, brothers, Curtis, Rhea, Russell “Buck”, Roland “Pete”, Richard “Dick”, and her sister, Emma M. Cauthen “Doodle”.

Funeral services will be held Wednesday, September 5, 2018 at 2:00 p.m. at Dublin United Methodist Church with the Rev. Don Handshew officiating. Interment will follow in the Dublin Town Cemetery.

The family will receive friends on Wednesday at the church from Noon until 2:00 p.m.

In lieu of flowers, expressions of sympathy may be made in the form of donations to Dublin United Methodist Church, or New Dublin Presbyterian Church.

Our deepest appreciation is extended to the Lewis Gale Hospital – Pulaski nurses, “Angels nursing care”, and to her caregiver, Jenny Branscom.