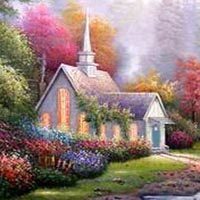 Lavonda Kaye Cox McGuire, 43, of the White Gate community, Pearisburg, went to be with the Lord on Saturday, April 25, 2009, at her home after a courage battle with cancer. She was born in Wytheville, Va. on October 7, 1965, the daughter of Bennie D. Cox and the late Barbara White Cox.

She was a loving Mother, Wife and Friend. She loved others much more than she ever loved herself. She never met a stranger and talked to anyone. She always said, “I don’t know how long I’ll be here but I’m going to make the most of each day,” and she did. She knew that she was ready to meet Jesus but we were not ready to let her go. She was a member of Shady Grove United Methodist Church.

Funeral services will be Wednesday April 29, 2009, at 11 a.m. at the A. Vest & Sons Funeral Home, White Gate with the Rev. Jack Jenkins and the Rev. Brad Lewis officiating. Burial in the Stinson Cemetery, White Gate. The visitation will be Tuesday April 28, 2009, at the funeral home after 2 p.m. and the family will receive friends from 6 to 8 p.m.