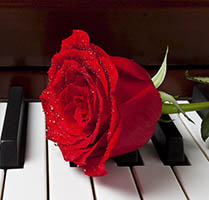 She grew up in Springfield, Tenn., and graduated with honors from Shorter College in Rome, Ga., in 1946. After her marriage to Bill McGuire, she raised her family in Pulaski, Va. She later moved to Blacksburg, Va., where she lived until she moved to Greenville, N.C. to be near family.

In Pulaski, Va., and Blacksburg, Va., Florence was a devoted member of the local Methodist church and an active member of the community. She presided over several clubs and volunteered in many local concerns. She was a good friend to numerous members of each community and her friends remained devoted even after she moved away.

She maintained communication with her family and friends with her beautifully written letters. She was known for her letters to those who were experiencing events to celebrate and to mourn. She wrote to her grandchildren weekly until just recently. She was also noted for her sense of humor. She often entertained guests with jokes and funny stories.

Florence was a gifted musician. She played the piano by ear and shared her gift with all who visited her. Most recently she played for several events at Cypress Glen Retirement Community and for her great grandchildren when they visited her. She loved reading and continued to discuss good books with visitors until just weeks before her passing. She also followed college sports and enjoyed reviewing the games of several ACC teams.

Florence was predeceased by her parents and her brother, Philip Brooks Bell Jr. She is survived by her daughter, Jamie McGuire Kirby and husband Ed, of Greenville, N.C.; her son, William Mark McGuire, and wife Donna, of Katy, Texas; and her sister, Margaret Bell Davis of Princeton, Ky.; two grandchildren, Anna Malykont and husband Ethan of Culver City, Calif., and Will Kirby and wife Hayden, of Wilmington, N.C.; five great-grandchildren, Sofia Malykont and Eliza Malykont of Culver City, Calif., and Rizzie Kirby, Wilson Kirby and Brooks Kirby of Wilmington, N.C.

A service in her memory is being held at St. Timothy’s Episcopal Church Monday, Dec. 23, at 11:30 a.m. Memorials may be made to American Cancer Society, the Service League of Greenville Inpatient Hospice, or to any other church or charity of choice.