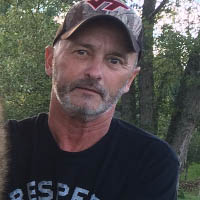 Brian Keith “Mouse” McGuire, the “Bland County Legend”, 55, lost his courageous battle with cancer on Sunday, September 1, 2019, peacefully, at his home. He was born June 2, 1964 at Pearisburg, VA, the son of Harry Thomas (“Tommy”) and Catherine Blankenship McGuire.

Mouse grew up in White Gate and graduated from Giles High School, Class of 1982. He was always smiling and was a “people person.” He worked as a land surveyor and a salesman for Lowe’s for 18 years, but his favorite job was being “Papa”. He loved children, especially his grandchildren. He was an avid fan and collector of John Wayne memorabilia and enjoyed scratch off lottery tickets. He never met a stranger and gained numerous special friends throughout his careers which he never forgot you once he met you. He was loved by many and will be greatly missed by those who knew him.

He was preceded in death by his father, Harry Thomas McGuire, his sister, Kay Clemons and his father-in-law, Larry Atwood.

Per his wishes, Mouse has been cremated. A memorial service will be held Wednesday, September 4, 2019 at 7:00 P.M. at A. Vest & Sons Funeral Home Chapel, White Gate, with Pastor Tom Maurer officiating. The family will receive friends at the funeral home from 4:00 P.M. until service time, 7:00 P.M.