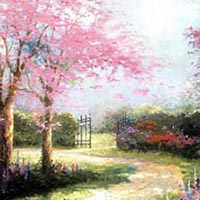 On Saturday, September 6, 2008, at her home in Fairlawn surrounded by her family, Peggy Siner McGee went to her heavenly home after a long courageous battle with cancer. She loved her family dearly; a homemaker who believed God came first in her life.

She was born February 10, 1932 in Pulaski, Virginia. She graduated 2nd in her class at Dublin High School, where she also received the DAR Good Citizenship Award and was Homecoming Princess her senior year.

Funeral services will be held Tuesday, September 8, 2008 at 2 p.m. at the Fairlawn Presbyterian Church with the Rev. Terry Woodard and Rev. Jim Walker officiating, with a special message from her daughter, Deborah. Interment will follow in the Highland Memory Gardens in Dublin.

The family will receive friends from 6 until 8 p.m. Monday at the funeral home. The McGee family is in the care of Mullins Funeral Home & Crematory in Radford. www.mullinsfuneralhome.com.